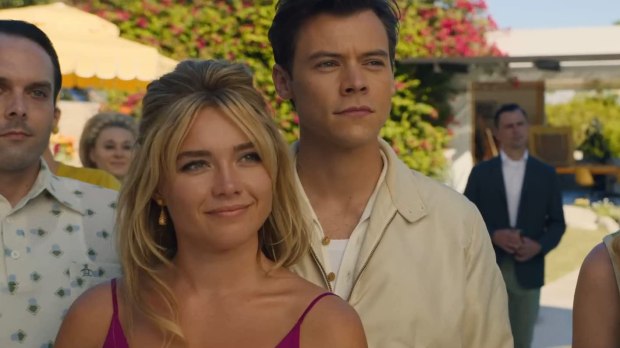 Don’t Worry Darling is a thriller set in the 1950s. The film is based around a housewife who appears to have the perfect life; however, she lives in an experimental community and starts to be concerned that her husband is hiding some secrets from her. A captivating synopsis and storyline.

Olivia Wilde is known for being an ambitious, career-driven woman. A 38-year-old mother, actress, filmmaker, director, and style icon. After the success of Wilde’s 2019 film ‘Booksmart’, her new production ‘Don’t Worry Darling’ was highly anticipated by film fanatics worldwide. The casting for the film is something that has drawn attention on social media, Florence Pugh is the main character for the film. Pugh is known for her roles in Midsommar, Little Women, Lady Macbeth and much more. Pugh’s co-star is English singer-songwriter and now actor; Harry Styles. Styles made his acting debut in Christopher Nolan film ‘Dunkirk’ in 2017. For months leading up to the release, fans already began to make assumptions around what the film would contain, it’s a psychological thriller and behind the scenes pictures have revealed there are scenes where the characters have blood on their faces and clothes, suggesting a scene containing violence.

In a year following a pandemic and when cinemas have not been able to operate at full-capacity or in most countries, not even able to open at all, it is an intriguing idea that there are incredible new films such as Don’t Worry Darling to go and see in the cinemas and experience all that excitement once again. The premiere caused commotion on social media for many reasons, such as the arrangement of the cast in the pictures and a video of two of the stars with Styles appearing to ‘spit’ on Pine before sitting back down. Whether it was real or not, the internet went into an absolute frenzy about it. ‘Fan edits’ of the movie which include short clips and theories, have circulated social media platforms such as TikTok, Instagram and Twitter, arguably generating even more attention than the film’s own marketing.

Social media interaction has played a major part in the marketing for the film. Olivia Wilde’s personal Instagram basically became a Don’t Worry Darling update account, and there’s nothing wrong with that. When the film wrapped in February, Wilde took to Instagram to individually thank all her co-workers with dedicated posts to the cast, the production team and her friends. The tributes and thank-you’s caused a stir on social media, twitter in particular – as every word of the posts were analysed by adorning fans of the cast.

Wilde never fails to impress; her work is guaranteed to be a good watch

This film is still such a hot topic, even just over a month after its release, the buzz around it has not died down. The rumoured drama involving the cast, the relationships outside of the set and the Don’t Worry Darling is going to go down in history, you heard it here first.