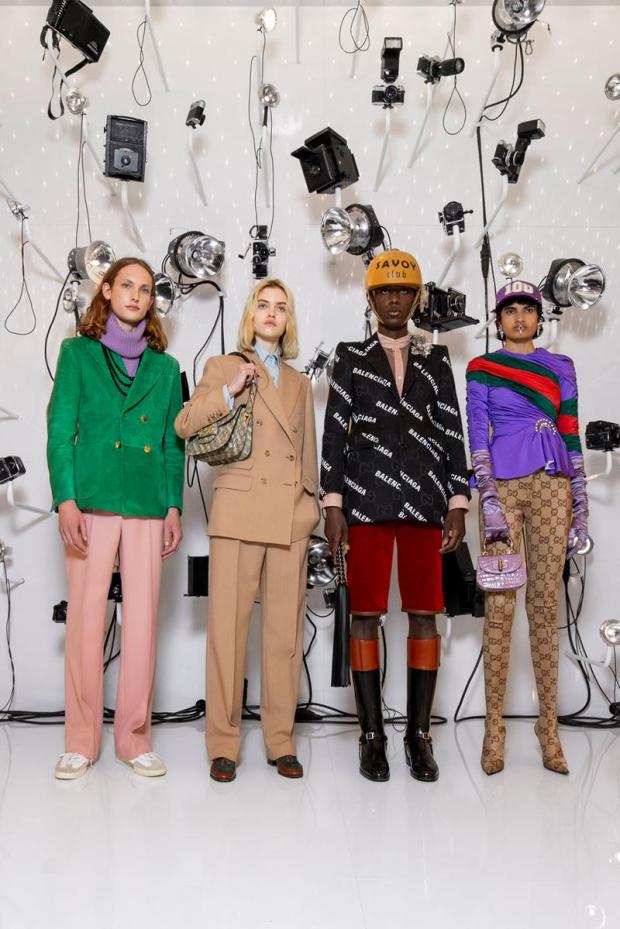 Welcome to the Balenciaga X Gucci ‘love story’ that came in full circle when the deemed ‘collaborative excellence’ collection hit the fashion hemisphere.

Vandalised store front windows, savvy merchandising and synonymous branding merged the motifs of both brands core collectives, and modifying them into new interpretations of signature pieces – the transformation of the double G morphed into the double B.

Balenciaga’s creative director Demna Gvasalia and Gucci’s Alessandro Michele went above and beyond appropriation by breaking down the collab from product level. The superior switching of fabrics and trims from their respective ateliers have formed blueprints spurring the introduction of the golf Balenciaga clasp fastened to a Gucci print bag or the classic Balenciaga Triple S sneaker updated with a Gucci floral print replacing it’s upper fabric.

In apparel, the line-up features an expensive range of garments, including maximalist silhouette jackets and coats which are ‘hacked’ by the synonymous Balenciaga logo. Such designs have also arrived in the forms of lace blouses, sequinned tops and street-ready parkas.

In regards handbag talk, Michele has advanced iconic profiles from both brands, with Gucci’s Jackie 1961 and as above, Balenciaga’s Hourglass. The headliner dominating the fashion house love story however is the birth of the Gvasalia-helmed brand’s Ville Top Handle bag, splashed with the GG monogram.

The modified ‘Gucciesque’ designs have sparked topical conversation in the fashion world through the blunt re-worked nature of each piece. Rather than a subtle pairing both couture houses have prioritised ‘statement’ rather than ‘subtlety’ at the epicentre of the collaboration, a pairing so bold that hasn’t been as dramatised on both the High Street or Fashion Week. Especially since deriving from two highly acclaimed fashion houses like Gucci and Balenciaga.

Exploring ideas of both authenticity and appropriation, Gucci and Balenciaga motifs have merged to create new interpretations of signature pieces to curate the highly anticipated “Gucciaga” limited capsule readily available at pop-up stores across the US and online.

Following in the footsteps of past exclusive drops much like those released by Supreme, the slim availability of this collaboration has heightened the ‘sought after’ nature of the release, lending the collection a selective, exclusive and limited-edition feel. Living in a 21st century contemporary society driven by desire and exclusivity, this undivided drop has had us savvy fashion buyers hooked by a thread – and in this case one that has been spun in the Gucci house and now interlocked in the seams of Balenciaga apparel.

The co-branded range has dropped at 74 pop-up stores on November 15 across the US, including some of the main fashion hotspots; New York, Miami, Beverly Hills and Chicago. Such limited stores offer the early fashion adopters amongst us the chance to purchase ready-to-wear; selected apparel, shoes, accessories and the staple main characters – the Gucci ‘hacked’ bags.

The Hacker Project Pop-Up Locations, US:

As a nation of savvy buyers and style seekers viewing this seamless collaboration almost feels criminal. We’re so used to associating a signature silhouette with an famous monogram or logo when it comes to haute couture fashion houses like Gucci and Balenciaga, and so when the two blur those separate lines it comes as no surprise we want to get involved with the hybrid.

Dominating social media, high street’s, fashion week and recent news the Hacker Project couldn’t have been announced at a more fitting time for the Gucci corporation. With the emancipation of the ‘House of Gucci: A Sensational Story of Murder, Madness, Glamour and Greed‘ running parallel to the curation of the G X B collaboration has outlined just how powerful the couture brand inflicts upon contemporary fashion and societal consumerism.

Left speechless at the bonding of two of the biggest fashion houses in the world, our only question left to ask is… what comes next?

View all posts by miaharding →