“As one of the fastest growing retailers in the world we’re showing no sign of slowing down.” – PrettyLittleThing Mission Statement, 2018.

PrettyLittleThing or PLT has been crowned the ‘fastest growing online fashion retailer’ according to data released by Hitwise in 2017. The growth in ‘search interest’ has certainly increased after site traffic has risen by a staggering 663 percentage year on year since 2014. Most importantly for the company their sales have also risen, in just six months sale profits soared by 132%, valuing them at £168.6m in August 2018, a clear increase from the same period the year before at £72.7m.

The Manchester born brand PLT, was founded in 2012 by brothers Umar and Adam Kaman, who are the sons of Boohoo co-founder Mahmud Kaman, making them pedigree to the world of business and fashion. Back in 2012 the business was dispatching just 20 packages a week to now being one of the world’s biggest online retailers.

PLT markets as a forward-thinking fashion brand that demystifies style by taking the runway to real life at an affordable price. The brand caters for all shapes and sizes by supplying clothes from sizes 4-26, they also offer inclusive ‘PLT Ranges’ which include; petite, plus, tall and their ‘shape’ range designed for those with an hourglass figure.

Perhaps one of the biggest factors to the rocketing success has come from the brands strong ability to fashion forecast. Identifying emerging fashion trends for stylish young females, quicker than you can say ‘PLT’. After a trend becomes popular the brand will have their version of that item up on their website within days at extremely affordable prices. Taking style inspiration from the biggest celebrity names and marketing it to their consumer in the fastest way possible- often through their social media accounts. In 2016 Kylie Jenner wore a £27 orange PLT dress to their US launch party and just 24 hours later, the dress has completely sold out. 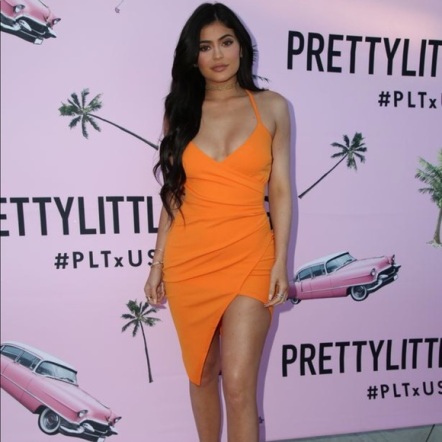 Celebrity culture is a huge part of the brands identity, they pride themselves on staying ‘cool and relevant’ by associating with celebs, bloggers and influencers where they build high profile relationships with them. PLT works with influencers who support the brand by driving awareness to potential consumers and fans, acting as their ‘brand ambassadors’.

Owner, Umar, credits a large part of the brands success to celebrity endorsement; “By forging relationships with celebrities and reality stars who have become ambassadors of the brand it has enabled us to drive mass awareness of PrettyLittleThing, both in the UK and overseas.” Which he stated in an interview with Greater Manchester Business Week.  In the past year the brand has released line collaborations with celeb style icons including; Kourtney Kardashian, Maya Jama, Ashley Graham and just this week a ‘glamorous winter’ inspired range with model Hailey Baldwin.

Due to the brands phenomenal worldwide success supplied by clever marketing strategies and a unique brand identity, it seems like PLT are dominating the market and at this rate will continue for the foreseeable future. “For me, I don’t think we’re successful enough yet, a lot of people would say we are, I think we have a long way to go, we still have a lot to achieve,” owner Umar states in 2018. So does this mean we still have more to expect from the brand? So the likes of Topshop and River Island better start upping their game.