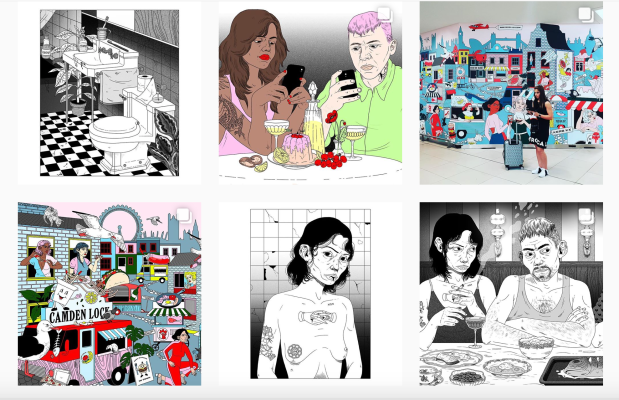 As well as friends, favourite brands and social media influences, these four illustrations should be followed to inject creativity as long side feminism and daily life inspiration and motivation into the feed.

Bert Vallo she is a full-time illustrator and Graphic Designer, she’s originally from Budapest but now lives in London. Bert Vallo’s inspiration comes from people she had met or observed whilst travelling. She is obsessed with how people do things and their feelings, this is why she enjoys focusing on different people’s identities as well as female sexually which can be seen by the elegant drawings of naked women on her Instagram. Bert Vallo also blogs about her illustrations giving a brief story behind them, my favourite one being Paraphrase which was inspired by London’s atmosphere.

Melodie Perrault is based in North America as a tattoo artist. She is also an illustartor who regularly will put her provocative, very creative designs onto Instagram. Melodie Perrault is a proud feminist and believes in empowering women around the world through her work. Even though it is very controversial it is also inspiring and liberating, she represents independent women and is driven by sexual liberation. Melodie Perrault has her own online shop selling t-shirts, tote bags, posters, pillows and mugs all showing her designs and creations, shop here.

Robin Eisenberg is an artist and a designer from Los Angeles. She has always been into drawing and decided to become a full time artist in 2010. Her work is bright and outstanding, since she often uses neon colours, regularly seen as animations. On her blog Robin Eisenberg states in an interview to people of print in 2015 that she likes the idea of ‘appreciating the weirdness in beauty and vice versa’ whilst taking inspiration from things around her like fashion, makeup, books, dogs, the beach as well as feminism and sex. Space is also a large part of her work, she frequently draws women with three eyes and purple, blue, or green skin. Robin Eisenberg currently has Society6 store selling phone cases and art prints, shop here. 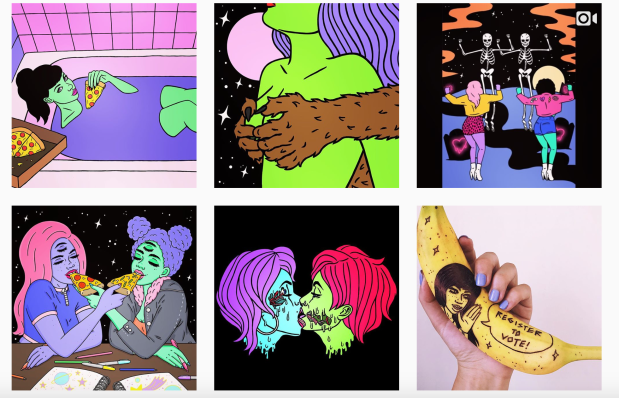 Polly Nor is an illustrator based in north London, she did a foundation year in Grapic Design then went on to study illustration. She describes herself as an ‘Artist – Best known for drawing women and their demons’ and that’s exactly what she does. She communicates how women feel daily within this generation through her drawings. Polly Nors ilustartions are very bold and honest, as she takes her inspiration from what she calls ‘girl chat’ about sex, gender issues and relationships. Polly Nor does have her own online shop selling t-shirts, pins, tote bags, phone cases and prints- shop here.