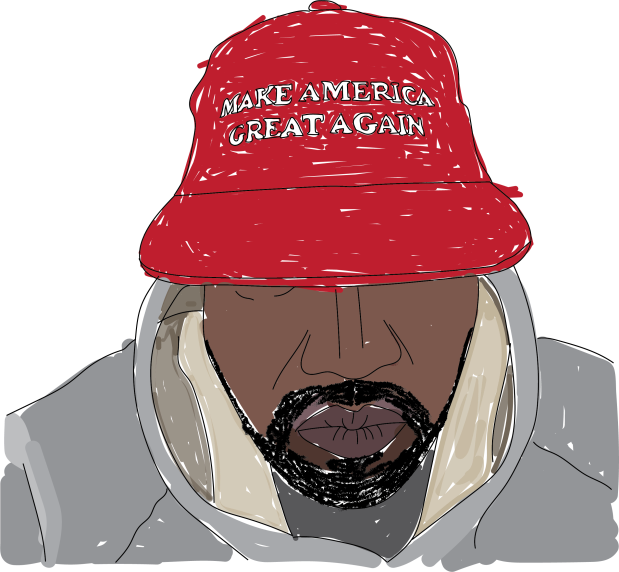 From famously saying off-script “George Bush doesn’t care about black people” live on television in 2005, to sporting the MAGA hat in 2018, where did it go all go wrong for Ye? Kanye West was once a voice for the people and his hometown of Chicago. His songs were lights of inspiration and he played an important role in hip-hop culture, so the present but ambiguous reality (is he in fact an advocate of Trump?) Is a hard pill to swallow for long-term fans.

Rewind to February 2015, Kanye collaborated with Adidas and Yeezy Season 1 was born and then so did his presence in the fashion industry. Yeezy grew and as did the hype, making the brand more and more exclusive in quantity, but most importantly in price. It was becoming apparently problematic Kanye wasn’t making his clothes for the kids of Chicago but the Rich Kids of The Internet. The kids that he made music for, those he fought for and he himself once was, seemed to become a bit of a distant memory. Spoken word poet Jasmine Mans’ piece, “Footnotes for Kanye” from 2016, brutally confronted Kanye: “Do you know how many kids at the protest had your sneakers on? None of them. Do you know how many of your songs were played at the protest? All of them.” It seemed this was the beginning of The Life of Pablo Kanye losing touch of the Late Registration Kanye.

Kanye soon disappeared from the internet to presumably focus on music. April 13th 2018 he lives to tweet again, bringing the heat, showing love to the 45th president in a tweet explaining: “We are both dragon energy. He is my brother. I love everyone.” The fire-breathing tweets continued and Twitter was seemingly ready to cancel the rapper altogether. In the midst of these tweets, the Charlamagne interview was released. For two hours Kanye opened up about his mental health, his broken relationship with Jay-Z and his opioid addiction following a plastic surgery procedure. The interview was raw and revealing, giving fans the insight they’ve probably needed.

However, controversy sells. It’s important as consumers to pay attention to this; marketing mishaps are no longer mishaps. Big corporations such as Pepsi have a big enough understanding of how the world works, to avoid putting out adverts as out of touch as the Kendall Jenner world-peace-hero campaign in light of police brutality and Black Lives Matter in America. So it poses the question; is Kanye a walking guerrilla campaign?

Live on TMZ: “When you hear about slavery for 400 years. For 400 years?! That sounds like a choice” it’s hard not to question how far this has gone. All publicity is good publicity is a tool both Kanye and Trump are exercising to the upmost degree but if the public can see right through it, it’s just comical. The way in which Kanye markets himself, his brand and his 2018 political stance, puts him in the centre of the public’s attention. With albums to release, clothing lines to sell, maintaining a buzz around his name is the key to success and sales. The College Dropout rapper has seemingly become the sellout rapper.

In this age of shock advertising and controversies, are Kanye’s actions worth it anymore if you’re hurting the very people who made you. In a political climate as intense as it is in America, with black people still being targeted by systematic racism, immigrant children being ripped apart from their families detained by ICE, it’s important for someone as impactful as Kanye to be making the right decisions. With the likes of Snoop Dogg, Lana Del Rey, Chris Evans (the list does go on), calling the rapper out on social media, we’ve arguably reached a point of no return that Kanye simply isn’t the Kanye we want him to be.